Blog Tour: The Girl And The Stars by Mark Lawrence 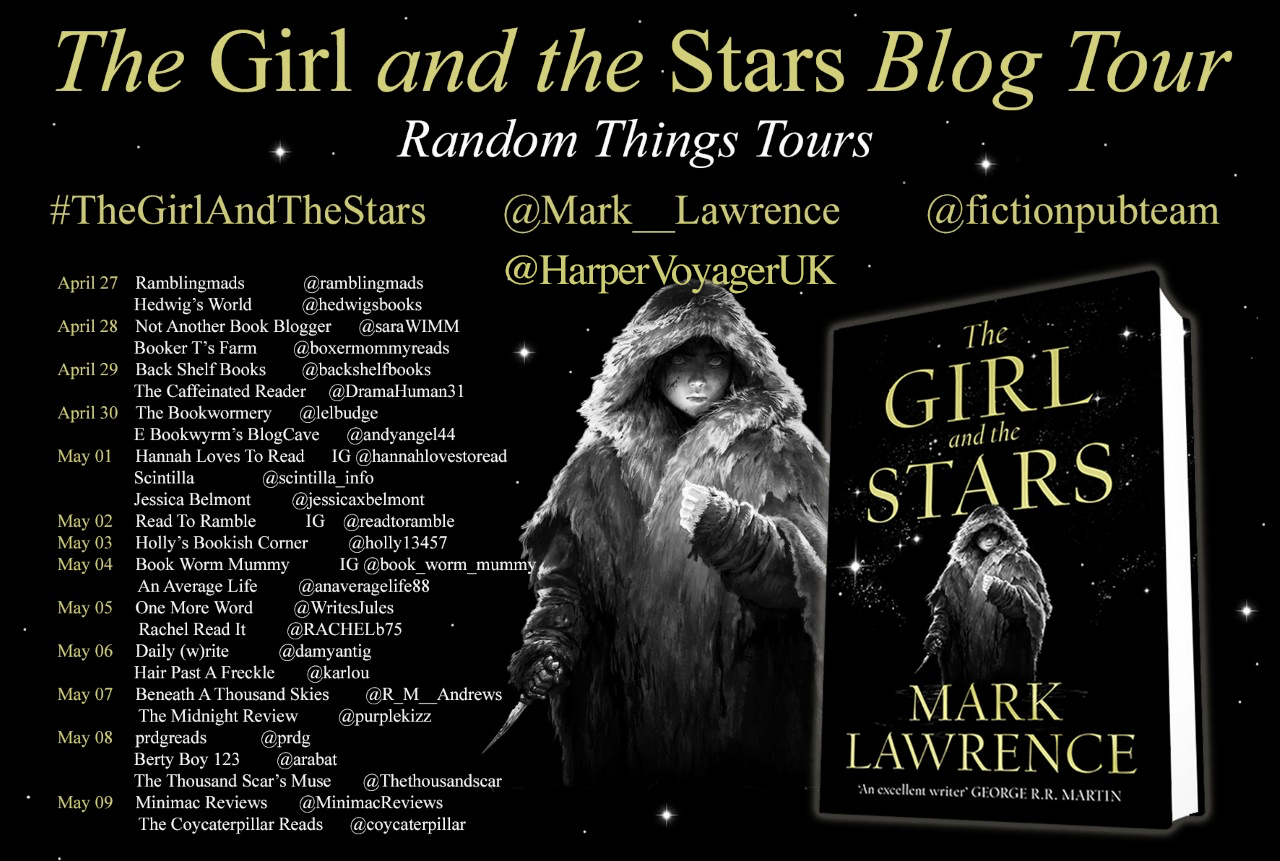 A stunning new epic fantasy series following a young outcast who must fight with everything she has to survive, set in the same world as Red Sister.   In the ice, east of the Black Rock, there is a hole into which broken children are thrown. Yaz’s people call it the Pit of the Missing and now it is drawing her in as she has always known it would.   To resist the cold, to endure the months of night when even the air itself begins to freeze, requires a special breed. Variation is dangerous, difference is fatal. And Yaz is not the same.   Yaz’s difference tears her from the only life she’s ever known, away from her family, from the boy she thought she would spend her days with, and has to carve out a new path for herself in a world whose existence she never suspected. A world full of difference and mystery and danger.   Yaz learns that Abeth is older and stranger than she had ever imagined. She learns that her weaknesses are another kind of strength and that the cruel arithmetic of survival that has always governed her people can be challenged.

The Girl And The Stars is certainly not Mark Lawrence’s first rodeo. However, It is the most poignant epic fantasy that I have experienced in a long time.  The story envelops you like a long lost relative after decades apart…everything about it just feels right.  This is the kind of story that leaves you grappling with the fight for cognitive cohesion.  How on earth do you get your thoughts down in a review in regard to a book of this magnitude.  The narrative took me hostage and posted my ransom.  I didn’t want to be found, I wanted to be immersed in this world for the foreseeable future.

My kindle only made it through the read by the skin of its teeth.  There are some elements of a story that just speak to you and The Girl And The Stars just had it all.  it drew out unbreakable connections, the electricity snapping between us.  The book quite simply felt like a living and breathing entity.  You feel the emotion and the outpouring of love that Mark Lawrence has for this story and it spoke completely to the heart.  It’s almost like the book knew how you tick and brought you everything you have been craving.

Don’t be fooled into thinking that this is a book that you can read a few chapters at a time.  The Girl And The Stars will rapt your attention and the fight against it will be a futile struggle.  Epic fantasy.  Survival.  Family. Unbreakable bonds and children of different abilities.  The prose was like titanium – solid.

Mark Lawrence is an author that I have failed to get around to reading, I am ashamed to admit but now I have had a taste of his work, I will be seeking to change that immediately.  He has brought The Girl and The Stars to life with such a glorious 8k dimension to it.  He has created a fully immersive epic fantasy and surpassed all expectations – my brain wanted to explode.  The world building was mind blowing and I was experiencing it in VR.

We meet Yaz, our sixteen-year-old female protagonist, a member of the ice tribe, the ictha.  She knows that she cannot ascend to an adult member of the tribe without being judged by the regulator, Kazik.  Yaz has known for many a year that she wasn’t normal, her abilities would be judged harshly and would end up being cast away into the pit of the missing, where all broken children end up.

Inadvertently or not Yaz ends up in the pit with her brother, Zeen.  Her one and only mission is to save her brother, who in her mind, doesn’t deserve to be in the pit.  After a considerable amount of time she comes face to face with a despicable giant – who just happens to gorge on the flesh of the broken.  Yaz, however, is rescued by other members of the broken and she is introduced to a new clan that can survive below the ice.  They have adapted to their new environment and Yaz has a whole lot of adapting to do.

The Girl And The Stars laser precise and hits its target every time.  An intricate magical spell, you fall deep, and its rich narrative is a fresh take on a populated genre.

Thanks to Anne Cater@Random Things Tours for my spot on the blog tour.

Mark Lawrence was born in Champaign-Urbana, Illinois, but moved to the UK at the age of one. He went back to the US after taking a PhD in mathematics at Imperial College to work on a variety of research projects including the ‘Star Wars’ missile defence programme. Returning to the UK, he has worked mainly on image processing and decision/reasoning theory. His first trilogy, The Broken Empire, has been universally acclaimed as a ground-breaking work of fantasy, and both The Liar’s Key and The Wheel of Osheim have won the Gemmell Legend award for best fantasy novel. Mark is married, with four children, and lives in Bristol.

The Shadow of the Gods by John Gwynne | ARC Review

Guild Of Tokens By Jon Auerbach